Warning! For a richer experience on this web site, you should enable cookies in your browser.

Using the Financial Reports on Ed-Data

Ed-Data financial reports enable you to access financial information for school districts and county offices of education in a variety of ways, including 5-year-trend graphs and the ability to share, download, and print the reports.

Click here to go to the state-level financial report

Each school district and county office of education must submit its financial data to the California Department of Education (CDE) in a uniform format using the Standardized Account Code Structure (SACS). The data posted on Ed-Data are provided by the CDE and are the unaudited actuals. LEAs report their financial data to CDE based on the state fiscal year – July 1 through June 30.

The Ed-Data financial reports are organized into four sections, which you can expand by clicking on the blue bars:

Where to find the financial data

Financial data are available at the district and state levels. To get to the financial data for a school district, county office of education or at the statewide level, click on the "Financial Data" tab.

Tips for viewing the new reports:

We have streamlined the new reports to make it easier to see summary information, but you can access the details with a simple click:

How to compare financial data

You can compare district finances, or view data for multiple districts in one place by clicking the

icon to get to district comparisons. You'll find it right by the district name: You can also get to District Comparisons from the "Comparisons" menu at the upper right corner of each page. Once there, scroll down and click the ... next to "Finance" to view all available finance data elements. 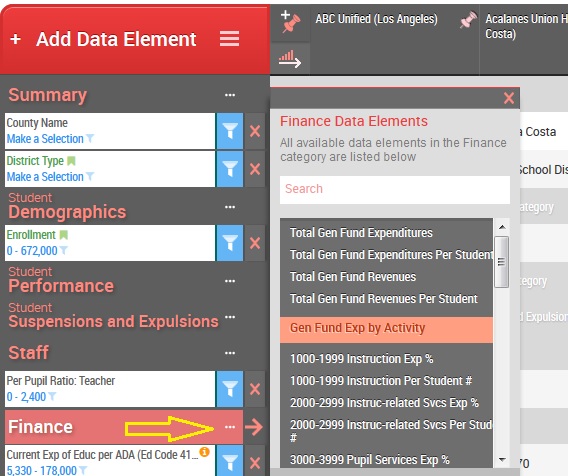 More about the data in the financial reports:

Districts report their revenues and expenditures to the California Department of Education (CDE) prior to the completion of their annual audit. Every effort is made by the CDE to catch errors or misinterpretations. However, the unaudited information is not changed after it has been certified and released by CDE. Therefore, the SACS financial reports may include data that districts later correct, based on their audits.

County offices of education offer instructional programs, particularly Special Education, Vocational Education, instruction in juvenile detention facilities, and programs for students at risk of failing. The County School Service Fund is analogous to districts’ General Fund. Ed-Data presents data for All Funds and County School Service revenues and expenditures, plus expenditures by activity and by instructional program, in the Financial Report for County Office.

The General Fund, the largest part of the budget, covers most of the district’s operations. The money is categorized as Restricted or Unrestricted depending on the funding source. For example, many federal and state categorical programs are designated as Restricted because of regulations about how the money may be spent. Unrestricted revenues can be spent at the discretion of the school board—but within the constraints of contracts with employees and the Education Code.

Ed-Data per-pupil revenue figures are based on General Fund revenues only, because such figures are the most appropriate to use for comparing the funds available to districts regardless of their size or configuration. Additional revenue information for individual districts (from governmental, fiduciary, and proprietary funds) is available in the Revenues and Expenditures report. However, Ed-Data does not provide a per-pupil calculation for revenues outside the General Fund because they vary based on unique district circumstances. Given such variations, comparisons on a per-pupil basis would be meaningless at best and could be extremely misleading.

California's method of counting students is average daily attendance (ADA), which is the total days of student attendance divided by the number of instructional days in the school year.

ADA differs from enrollment. Enrollment data on Ed-Data come from the California Student Longitudinal Data System (CALPADS) and is a count of students enrolled at each school on a specific day in October. ADA is normally less (approximately 95%) than actual enrollment because absences, even if excused, are not included in ADA. Note: While enrollment counts include all charter schools authorized within the district, the ADA only includes charter schools whose financial data are reported in the school district's General Fund, without regard to whether the charter school is locally or direct funded.

The ADA used for per-pupil calculations on the General Fund tables is the same that the CDE uses to calculate the Current Expense of Education. Although the Financial statement shows a per-ADA amount for revenues, a different basis, such as enrollment, can determine the revenue received by districts and county offices of education for certain restricted programs. For example, some programs may generate funding depending on the specific needs of the student population. Similarly, the Financial statement shows expenditures per ADA, but that may not accurately reflect the actual amount spent for each pupil because not all pupils in a school or district participate in the same programs or receive the same level of services.

The per-student figures on Ed-Data can differ from the numbers a school district publishes or refers to in discussions, depending on which items are included. In comparing figures, also be sure that the fiscal years are the same.

School districts or county offices sometimes use a per-pupil number that is based on the total General Fund expenditures and Second Principal Apportionment (P2) ADA rather than the specific definitions and annual ADA used for Current Expense of Education.

Districts vary widely in size, characteristics, philosophies, and challenges. Their expenditures differ, often for good reasons. The "per-pupil" number gives meaning and permits comparisons. The "percent of average" is provided as a frame of reference. It is important to investigate what is behind these numbers.

Districts have different averages for several reasons, including:

Taking financial data out of context can be misleading. Every school district's financial statement is public but may need explanation from the district office.

Note: Districts report their revenues and expenditures to the California Department of Education (CDE) prior to the completion of their annual audit. Every effort is made by the CDE to catch errors or misinterpretations. However, the unaudited information is not changed after it has been certified and released by the CDE. Therefore, the financial reports on Ed-Data may include some uncorrected data.

Take a guided tour of the financial reports via this webinar recording.

If you have questions about the data on Ed-Data, feel free to contact us.

If you need help with terms or acronyms, check out the glossary.